Today your business has two dimensions: Physics and online.

Physics is that we all try to take care (cleaning, order, friendliness, good presence, … ). Everything that makes the customer feel satisfied and perceived quality.

And the size of your business online? Is the most you can bring new customers, which you can multiply the visibility of your business, and that it can bring more profitability (in terms of turnover, regarding online investment)

The Generalitat Valenciana, through the Valencian Institute of Tourism Technologies, and in collaboration with the EOI Business School they have prepared a three afternoons seminar in which you teach so 100% practice how to give a boost to your business or your tourism project.

The seminar has tremendous value, but being subsidized, participation in it is free, (limited places, by order of registration).

have the brochure and registration information here.

When configuring corporate email accounts of a company, we have to make several decisions as

How many email accounts created?

and each of them does make physical mailbox, redirect or alias?

Basically there are two great options:

If a corporate function (not: accounting) He takes one person (not: Ana) accounting as an ALIAS will ana.

ADVANTAGE: As each employee has their mailbox, it is organized as he wants (filters, folders for clients, etc)
INCONVENIENT: when Ana, Carlos Berta or answer an email addressed to accounting, They undertake to put a copy to the other two (if you want to know about the response), ya que la respuesta es de Ana, se queda grabada en la carpeta “Sent items” Ana and the other two would not know that mail has been answered.

We create an address type contabilidad@midominio.com as a physical mailbox and configure IMAP mail clients type on multiple computers (The Ana, the Berta and Carlos).

Thus there is a single email that is managed from three computers. The advantage is that any of them can tell if a message has been answered and what the customer has answered. Forces everyone to work with common rules (Folder organization).

You can create certain personal accounts and certain physical weel addresses, so that an employee will have two mailboxes on your mail program: Personal and corporate or corporate affecting them.

Our company is developing the web and apps Parpalla.com

We hope to help them become the portal of intelligent consumption.
You can click here to get the App chafer. (Will open a link to the Google Play or the iTunes Store, depending on the operating system on the device you're viewing this page) 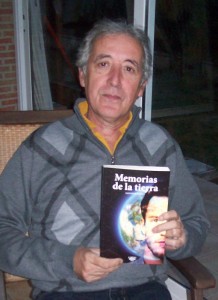 Our good customer and friend, journalist Salvador Medela People, He has recently published his novel, “Memories of Earth“, that links three separate stories thousands of years.

Initially, none of the protagonists of the three stories was a person of action. However, to the position of having to resign or to step forward at a crucial time in their lives, and their worlds, the three decided to accept the challenge, and take their own destiny in his hands.

One of the protagonists tells the story from the near future, where we will reveal the last hundred thousand years of humanity. It allows us to glimpse that know our past is what will help us chart a better course for the future.

All equipment Business Support congratulate Salvador for its achievement, and we encourage you to read this engrossing novel: Memories of Earth.

You will have to indicate that the connection is made by SSL, by TLS (accept any certificate), using the following ports:

It is possible that those who do not be configured email safely, may have connection problems. Therefore we have prepared a small guide that explains how to properly set up email in Microsoft Outlook program and an Android mobile phone.
Configuration Guide email apoyoempresarial.com

Complement: Do you question every time this? 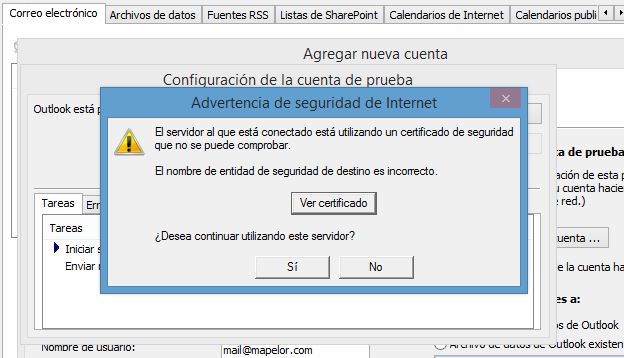 Here is explained how to avoid it: Guide to import the security certificate

For quite a few years, and with increasing intensity, all kinds are made
Internet transactions, for the convenience that implies. This has resulted
numerous kinds of scams and scams on the net, since it is easy to play with the need
people have to rent, selling or getting a job.

END_OF_DOCUMENT_TOKEN_TO_BE_REPLACED

The Law 34/2002, of 11 July, services of the information society and electronic commerce, also known as LSSI amended by Royal Decree-Law 13/2012 of 30 March
A major change for companies that perform email marketing campaigns is that the final paragraph of Article 21 is worded as:

When communications have been sent by email, said means must consist of including a valid e-mail address where I can exercise this right, forbidden sending communications that do not include this address.

The sea, shipments from no-reply@midominio.com addresses have become ILLEGAL.
Beware of email marketing tools, because if not take into account this consideration can be significant sanctions.

Google Analytics es, today a basic tool for the measurement and analysis of traffic for any website. It's free, easy to implement, and provides much information to webmaster:

– Where does the traffic coming to the site: what percentage comes through search engines or through which sites that we link. What are the sites that we link.
– The visits come from search engines, What words are those that have been used to reach our site.
– How long the user stays on our site.
– Which pages are the ones you have interested most.
– What is your country of origin…

Very important data for the web is improving and offering increasingly better quality content for your audience.

However, German commissioner has argued that the collection of IP addresses may violate the privacy of citizens. He has threatened with fines up 50.000 euros for the company you use on your website.

With what we know, in our country, although a webmaster know that you have visited a user from the IP 43.125.87.19 the 13 January at 17:04 does not bring any personal data.
The only one who knows that address was assigned to the router Jose Perez and his home is the ISP (Telefónica, That, Orange, Vodafone…) that provides access to sr. Pérez. And those companies do not provide any such information without a warrant.

It is possible that the German commissioner knows something we do not. Alternatively feel like going out in the news or even more Catholic than the Pope.

Although this is a free service, for Google this is a serious breach, because now most companies do not know if its budget on online advertising is still useful or not. And in that scenario, it is normal to reduce their spending on advertising in Adwords (a major source of revenue for Google, why he bought and offers free Analytics service).

In this scenario, it is normal that the lords of Google will spend whatever it takes to lawyers and to denounce the German commissioner in court. And also you require damages. And if you finally give reason, as in Spain, not pay the commissioner man who commits the cacicada, but the suffering taxpayers. Although perhaps give reason to Sr. Gaspar. We'll see.

There are still many unknowns about the future of this issue, but the only thing certain is that all German companies who choose to pay attention to your trustee will return to the average age of the Internet and will be less competitive, because they will have much less useful information to keep improving your website. And those who choose to disobey, have a sword of Damocles over their business. Now it is up to the German companies choose between fire and embers.

German plumber who has a web, I guess that will give equal. Now, for the German company whose core business is internet (virtual shops of all kinds, free web services that are financed by advertising…) itself is a blow. Even if it gets ugly, it is normal that the latter arising divert your internet business to other countries with less interventionist authorities, that after all, limit internet, in many cases it is like putting the tide.

I just hope the director of the Spanish Agency for Data Protection decides to establish itself as European and world champion data protection and ban here too.

We have completed the development of a new website for our client Comercial Tecma. Exclusive distributor in Spain of Rezina, continuous pavement best world.

You can see the page www.rezina.es

In the competitive world we live in, where companies have to struggle every day to survive, perhaps the best competitive strategy is innovation.

Innovation is not just a fad. It is a management style and corporate culture that makes the difference between a profitable and doomed to failure.

Innovation in the company is today the best competitive strategy, that we can continue.